What is OEE and how do I calculate the OEE ratio? 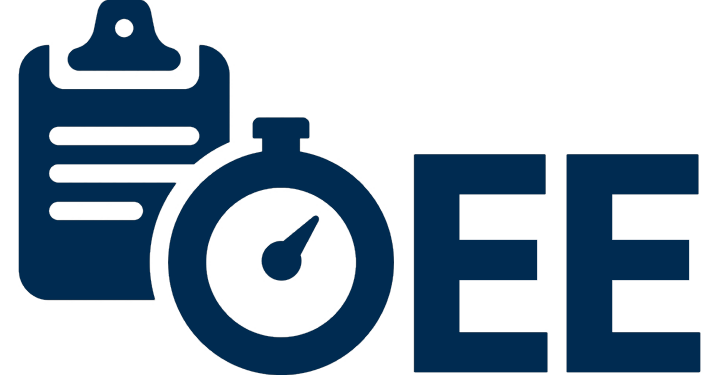 What is OEE? OEE (Overall Equipment Effectiveness) is a measure of manufacturing productivity and describes overall equipment effectiveness. By measuring OEE, manufacturers are able to identify their strengths, understand their losses, evaluate their progress and ultimately improve the manufacturing process.

OEE measures effectiveness across the three key areas of availability, performance and quality.

Availability is the ratio of effective run time to pre-planned production time of the plant. To determine your effective runtime, take your planned production time and subtract all the time your manufacturing process is not running. In other words, the time that was due to both planned and unplanned stops. Examples of stops are changeovers, such as reconfiguring a machine, and breakdowns.

A score of 100% availability is only possible if the process runs uninterrupted during scheduled production.

Power is the ratio of net run time to maximum possible run time and takes into account anything that prevents the manufacturing process from running at the maximum possible power and speed. Slower process cycles and small downtime events reduce the overall performance.

A performance of 100 % is only possible if the process runs as fast as possible and without interruptions.

Quality is the ratio of good parts to the total number of parts produced. Good parts are all parts that successfully pass through the production process the first time without rework.

A score of 100% in quality is only possible if every part that passes through the production process is completely free of defects.

2. How do I calculate an OEE ratio?

The calculation of an OEE ratio should provide the answers to two important questions:

– Am I using the equipment in production in an effective way?

– Where do measures need to be taken to improve the effectiveness of a piece of equipment?

With software like OPC Router that monitors and optimizes your production. Test the OPC Router free of charge and without obligation.

As far as the effectiveness of a plant is concerned, a machine is unproductive if losses occur in one of the six major loss areas:

These six loss areas are also reflected in the three categories or ratios “availability”, “performance” and “quality”.

Changeover and adjustment losses occur during changeover or switching between products or production processes.

Unscheduled stops and idling are often defined as a failure that lasts less than 10 minutes.

Reduced speed occurs when the machine runs at a lower speed than the planned design speed.

Defects lead to scrap or rework and are the consequences of a problem that has caused the machine to operate outside the predefined specification limits. 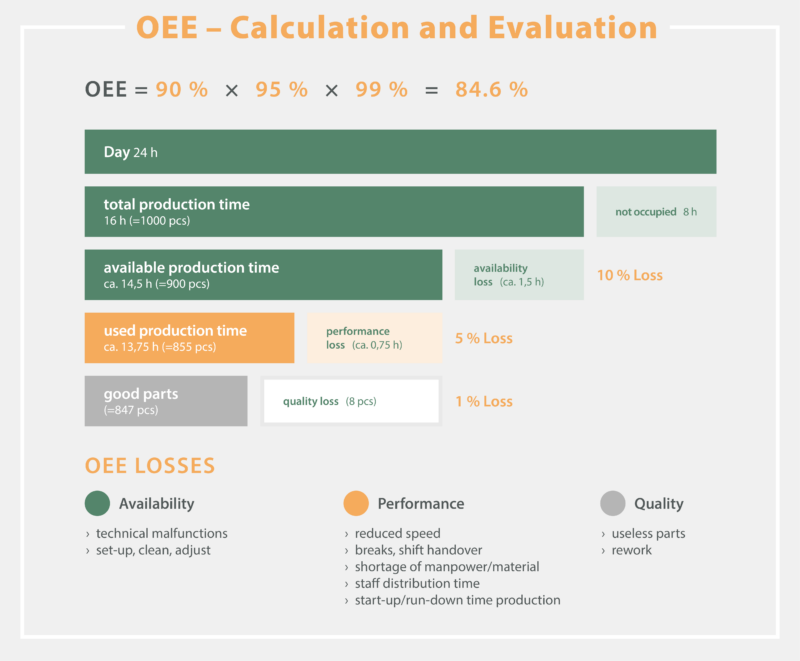 The final OEE assessment takes into account all losses that occur during the manufacturing process. This leads to an indicative value that shows the truly productive manufacturing time. For example, scores of 90 %, 95 % and 99 % in availability, performance and quality respectively can be multiplied together to give an OEE score of 84.6 %. Manufacturers can use the individual scores and the total score to identify where exactly operations can be improved.

How do I plan an OEE determination in my production?

Overall Equipment Effectiveness (OEE) is a tool that can be used to increase the productivity of a plant.

Deciding when and where to improve productivity, by how much and at what cost, depends on each company’s individual goals and capabilities. To learn more about how you can monitor and improve your production processes, contact our experts and feel free to test our middleware OPC Router.

The OEE in Practice

Increasing the productivity of a facility is the focus of many companies. The OEE provides an overview of where productivity can be increased and to what extent. The approach is systematic. Commencing with the available production time, the total time during which production can be carried out in a plant or with a machine is first determined. For example, a machine can operate for 20 hours a day. However, due to various technical malfunctions and the associated repair work, the machine runs for only 16 hours. Therefore, there is a loss of 20%. Since this machine requires maintenance in several shifts, the daily loss due to the changeover time is 48 minutes and consequently another 5%. During this period, the company will produce 250 units, of which 5 units will have to be sorted out due to various production errors. So, 2% of the produced number of units are lost every day. The OEE calculation therefore looks as follows:

The company’s task is to improve the OEE score to 74.48%. The high failure during production time stands out in this context. By Using the software, such as the OPC Router, breakdowns can be noticed and fixed faster. Different services can notify the mechanic quicker to stop production, indicate a failure, and assist in repair. That would already greatly benefit the production in this example. Reducing downtime from two hours to one hour would increase the OEE score to 83.79%, almost an increase of 10%.

With the REST Plug-in, the OPC router is able to query and also address REST web services. Almost every system can be connected via the REST API and it is therefore possible to retrieve data from these systems and also to transfer data. REST functions can also be called via a REST trigger. This enables a separate REST API structure for various systems that are connected with other available Plug-ins.

A Telegram bot is an ideal way to transmit information from almost every imaginable area whenever you need it. We refer to this special bot function of the messenger in the article of the Knowledge Base “Technology” and also give simple instructions on how you can create a Telegram bot yourself.

Using our OPC Router Network File Access Plug-in, a network-wide file transfer and file handling can be realised. This Plug-in supports the FTP (File Transfer Protocol) as well as the SMB (Server Message Block) protocol. Via FTP, files can be exchanged between file servers in different networks if the corresponding FTP server service is provided.

Further interesting articles on the topics of Industry 4.0, cloud, technology, alerting and practical application examples as well as case studies can be found in our Knowledge Base.

Digitize your production with the OPC Router

Test the OPC Router now free of charge and without obligation or subscribe to our newsletter and stay informed about changes and news.